Paul Draper was the frontman of Mansun – one of the most iconic bands of the late ’90s. Over the course of three albums (a fourth issued posthumously), they achieved something unique – after fostering a fervent cult following, they managed to maintain critical and commercial success with a series of intensely radio-friendly yet increasingly experimental records. Off the back of their biggest radio record, Mansun imploded in 2003 and Paul all but disappeared from view.

Paul will be performing a special ‘Six’ set, with tracks from the 1998 album.

Ex-Mansun frontman Paul Draper’s 14-date Spring ’18 tour celebrated the 21st anniversary of one of the most favoured British albums from the late Britpop era – Mansun’s Attack of the Grey Lantern.

When the band played in Manchester, Ronnie Stone who produced the original album agreed to come along and record the show to give us a new live version of the album recorded for the 21st anniversary, capturing Paul’s energetic stage presence, his fantastic band and classic Mansun tracks such as “Wide Open Space”, “Taxloss” and “Disgusting”, performed to a wonderful Manchester audience.

This 2LP Limited Edition Vinyl is available for Black Friday 23rd November in your local indie retailer and all good record stores. Includes an mp3 download of the album.

Great news! For anyone planning to come along to Paul’s acoustic tour in November, we will also have a very limited quantity, signed by Paul and available on this upcoming tour.

Performing tracks from his debut solo album Spooky Action, as well as Mansun classics and deep cuts. PLUS as yet unheard songs from Paul’s second solo album, due 2019. 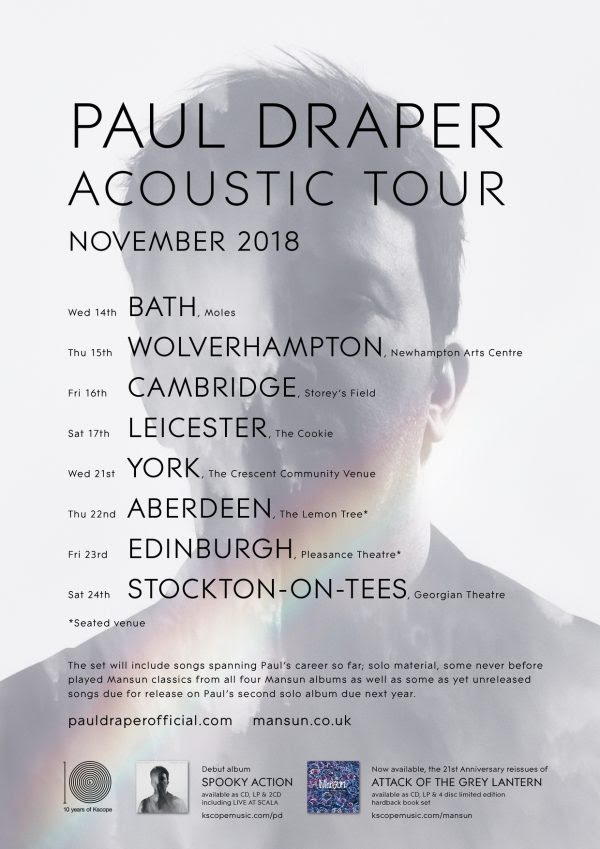