Featuring the legendary rock star in one of his most iconic poses, during The Stooges “peanut butter incident” at Cincinnati Pop Festival in June 1970
Wax Face Toys is pleased to announce a new series of figures in resin and vinyl from the best in music, film, and cult popular culture. Their first offering, a collaboration between music legend Iggy Pop and Wax Face Toys, is manufactured by Unbox Industries under exclusive license from Thread Shop, a division of Sony Music Entertainment.

Last month marked the 49th anniversary of the infamous “peanut butter incident” at Crosley Field. With a position taken from an Iggy and the Stooges concert at the Cincinnati Pop Festival on June 13th 1970, this resin figure captures Iggy hoisted high by an adoring audience in his iconic shirtless pose, seconds before smearing peanut butter all over his chest and throwing it into the crowd as The Stooges ripped through “1970” from Fun House.

Sculpted in London by ex-Madame Tussauds sculptors, this 15.7″ / 40cm figure (which is about 2 1/2 times the size of a normal bobble head figure) is molded in silver 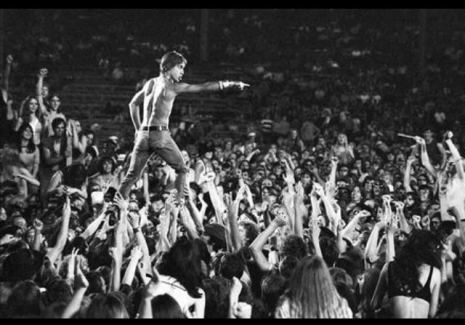 The black figure, as previewed in Dangerous Minds, has already sold out but other colorways will be available to purchase at Unbox Industries periodically.
The silver edition is limited to 35 pieces and will go on sale on June 29th for $249 (with shipping) at http://store.unboxindustries.info
Wax Face Toys is on Facebook and Instagram