The Bobby Lees‘ new record Skin Suit was produced by underground punk legend Jon Spencer of the Blues Explosion and will be released on Alive Naturalsound Records on May 8th.
The Bobby Lees are a young bone-shaking Garage Rock band out of Woodstock, NY. In the past year they’ve played with The Chats, Future Islands, Boss Hog, Daddy Long Legs, Shannon & The Clams and Murphy’s Law. They will be on tour in the US and Europe throughout 2020. Their sound mixes classic garage-punk hits with raw and emotive storytelling.
Audiotox UK states “Their raw and unapologetic energy promises to make you feel alive.” Listen to them and see for yourself.
FOR MORE INFO ON THE BOBBY LEES:
Website
Facebook

Roll up, roll up one and all as the 45RPM Club is in session and this month we bring you a whole bunch of singles to mull over and for those who love the 7″ format we have a couple of pure gold must haves whilst it seems a lot of bands prefer to release a video as part of their press kit to promote a single which is cool we’re a broad church and we’ll check out old school wax as well as digital-only singles and video singles just get em into us and leave it with us.  So here we go. The Hip Priests/ Electric Frankenstein – Split (Speedowax Records) It just wouldn’t be a 45RPM round up if The Hip Priests weren’t in town so thank fuck for Speedowax and this delicious split with the North American kings of Action Rock Electric Frankenstein.  Side A sees EF knock out ‘Generation Void’ with its beautiful riff-ola that takes us to the chorus that we can all join in on and throw our fists in the air – Amen to that motherfucker’s EF are in the house. The second offering is ‘I’ll Be The One’ which is a stronger tune with its Dead Boys vibe in the verse to that gang vocal chorus this is a wonderful opening side to any single.  Bring it on I say let’s see or rather hear a new full-length EF album that would be tremendous wouldn’t it? Flip it over and Shit Islands bad boys offer the excellent ‘Deja FU’ taken from their outstanding album of the year contender ‘Stand For Nothing’ and the second track is one that didn’t even make the cut on the album – imagine that, you have tunes you can save for a single that would be the first choice on pretty much any other bands album in this field ‘Nihilist Twist’ is a banger  and has a magic guitar break.  Record of the month? What do you think you silly billys. Join the Spasm Gang and get a limited edition press with a Hip Priests tote Bag  ooooh! Still winning at life! Spirit In The Room – EP (Neon Garage Records, Black House) Fucked up spat out rock from Los Angeles featuring the headwork of Dennis R. Sanders aided and abetted by Darren Howard, Phillip Bailey, and Kevin Bombay the three songs are somewhere between Bowie meets NiN (‘U R My Religion’) full-on freak out that is the epic ‘the Future Is Immediate’ Motorhead meets Cave and some of everything else thrown in for good measure.  Menacing and thrashing about is the name of the game please don’t play neat a strobe light or you’re fucked. ‘Monetary Prayer’ is Jim Jones meets Gun Club meets birthday Party and Gallon Drunk not so much of a stretch for sure but quality a plenty and a most excellent listen besides Rock and Roll is meant to be a bit dangerous and foreboding and SITR is all that and more. Pick it up on their Bandcamp page Here Facebook The Turbo AC’s / V8 Wankers – Split (Savage Magic Records) New York City’s The Turbo A.C.’s and Offenbach, Germany’s V8 Wankers come together for a 4-song split 7″ EP of high octane punk ‘n’ roll. Each band brings a stand-out track from their latest album plus an exclusive track just for this release. ‘fuckin Up Big Time’ is classic turbo AC’s big chorus and chugging riffs its a no brainer action rockers go fill yer boots.  a band made for split 7″ records (they’ve had more than most) Whereas V8 Wankers have been plying their action Rock for a decade and a half out of Germany and have stayed true to loud Punk Rock and Roll

Plastic Tears – Dark Passenger (City of Lights Records)
– Taken from their last long player ‘Angels With Attitude’ Another band who’ve held fast on their trademark sleazy Punk n Roll – Plastic Tears have and will endure. Check out the video below. Facebook ANC4 – ‘You´re the one’ (Beluga Records)  Digital Release from Beluga of the track ‘you’re The One’.  ANC4 (Arvidson & Nilsson Combo Four) is a newly formed Swedish band that will be releasing their first Long Player this Year.  The band consists of 4 members of the Swedish music scene, Roger Arvidson (Vocals & Guitar) who featured in Arvidson and Butterflies, Remains and Sonic Walthers, Tomas Nilsson (Vocals & Guitar) who fronted Mop Tops and Flying cow, the two songwriters are complimented by a strong rhythm section who also have great musical form, Janne Borgh (Bass & Backing vocals) who has played bass with both Strindbergs and Moderns, last but no means least, completing the line up is Niclas “Tidaholms Ringo” Österberg (Drums), The Front Line Band, Moa Blucher Blues Band among many others.

The band breathes new life into the sixties styled nuggets with strong melodies and sweet harmonies. as ‘You’re The One Will attain. Facebook

TV Coma – Have A Party (Wiretap Records) one that caused us some intrigue was TC Coma and their ‘Have A Party’citing the likes of Pup and Weezer as influences are always going to get our interest.  not the most immediate of tracks even if the video is a bit odd and there is too much facial hair for our liking the song is a grower no doubt about that. Facebook

Royal Republic – Anna Leigh (Nuclear Blast, Arising Empire) The first track off the new long player ‘Club Magic’ is with us and again pushing boundaries is the name of the game for Royal Republic. Looks like they had a ball making the video at least but again a grower and not the most immediate of singles. Facebook

Mono In Stereo ‘The Conversation’ (Rum Bar Records) Taken from the Album ‘Can’t Stop The Bleeding’ this is a really well-crafted tune full of good ole Rock and Roll with great barroom sing-a-long chorus and enough ragged edges to warm the cockles of the coldest heart.  simple (or at least they make it sound), Honest (as the day is long) wholesome alt rock with a punk rock heart like Huser Du or the Replacements or even more recent artists like Role Models check em out – Facebook

Geoff Palmer – ‘All The Hits’ (Rum Bar Records) Another new Rum Bar release sees The Connections songwriter or 50% of the team Connections release his solo record ‘Pulling Out All The Stops’  out soon on Stardumb Records / Rum Bar Records (dual label release) and this is the hook being used to reel us in and what a hook too. Geoff Palmer continues to destroy us with his songwriting skills once it hits your ears you can’t shake it.  It sounds like The Ramones have been on heavy rotation during the writing sessions and what’s not to love about that? 1-2-3-4 let’s go its dumb fun and bubble gum catchy as hell and music with a smile. why don’t more band kick up a shit storm of pop-punk rock like this – it’s beautiful! RumBar Bandcamp
Spread Eagle – ‘Sound Of Speed’ (Frontiers Music)  Its cock Rock O’clock folks wind back those clocks or get in a time machine marked late 80’s  for Spread Eagle without a hint of irony sing about Birds, speed (as in fast cars) no wait, they’re playing at a go-cart track which we all know is cool as so all is forgiven now where are my high tops and wrist bands and its great that Spread Eagle take safety seriously and everyone is wearing crash helmets.  Well done guys you Rock! Dust down your dead man’s suit and lace up your dancing boots, ‘cause Daddy Long Legs are back with a new album, and may well be coming to your town. ‘Theme From Daddy Long Legs’ eases us in gently before new single ‘Pink Lemonade’ takes us down a slightly different route than you might expect. Not a drastic change, but it updates their traditional sound; if you heard it on the radio, you’d like it, but not necessarily think it was them.

‘Ding, Dong, Dang’, on the other hand, could have been recorded in 1939, and sounds exactly like the title suggests, which is no bad thing. Some fine twanging from Murat here. ‘Morning’, Noon, Night’ would have a nod of appreciation from Howlin’ Wolf; down and dirty blues, just the way it should be played. ‘Glad Rag Ball’ gets the hips shaking, “suited and booted” indeed. If this doesn’t get you moving, consult your local medicine man.

‘Bad Neighborhood’ is a scuzzy, acoustic riff, and ‘Celaphine’ keeps up the train-track rhythm, all handclaps and foot taps. ‘Winners’ Circle’ has a breezy, up-tempo Chuck Berry feel to it, while ‘Back Door Fool’ slows things down in a country style, worthy of Jason Ringenberg. Classy.

‘Snagglepuss’ berates a “mean old bag of bones”, ‘Be Gone’ brings a hoe-down flavour; shove your coffee table aside and prepare to move, before ‘Wrong Side Of The River’ brings it all to an end with a more somber tone. If you’re familiar with their work, you’ll know that Daddy Long Legs won’t let you down. Another fine album, but to capture their essence, see them on their upcoming U.K tour.

“…like Chicago blues fired at the moon, played by the demented children of the Pretty Things.” – Rolling Stone 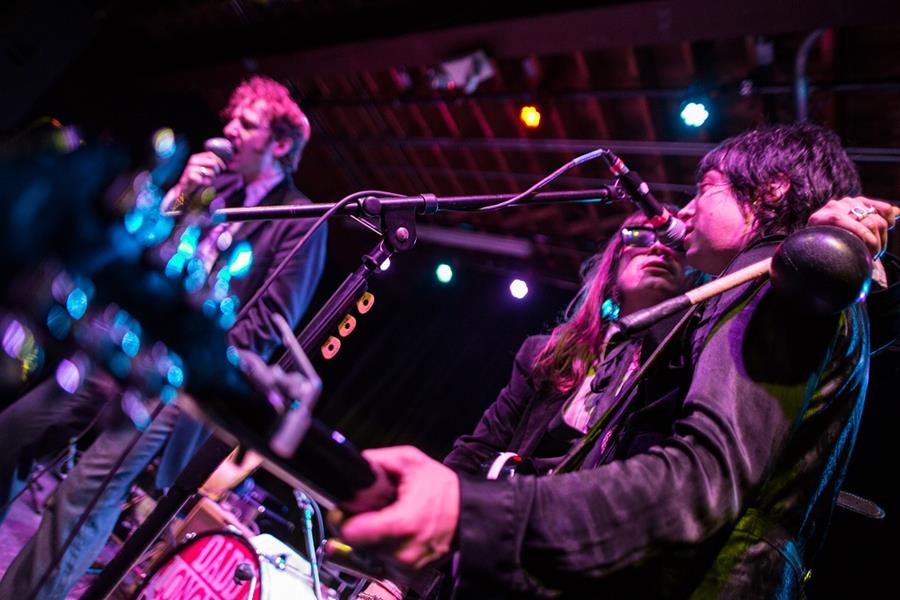 Frontman Brian Hurd describes “Mornin’ Noon & Nite” as “a Hoodoo Stomper in the vein of John Lee Hooker and is about one’s pure, savage lust for his or her lover.”

When asked by Village Voice “What is DADDY LONG LEGS?,” Hurd answered, “Rock and roll salvation through the spirit of roots and blues.” While influenced by the likes of Son House, Captain Beefheart, Howlin’ Wolf, MC5, and Dr. Feelgood, their sound personifies garage rock and punk with a contemporary raw twist performed in their own brand of supercharged R&B.

Since forming in 2010, the band has released two studio albums, a live album and two 45s on Norton Records. Their last album was 2015’s DADDY LONG LEGS Rides Tonight. The band has toured with Jon Spencer, Hurray For The Riff Raff, The Sonics, Nikki Lane, Nick Waterhouse, amongst others. 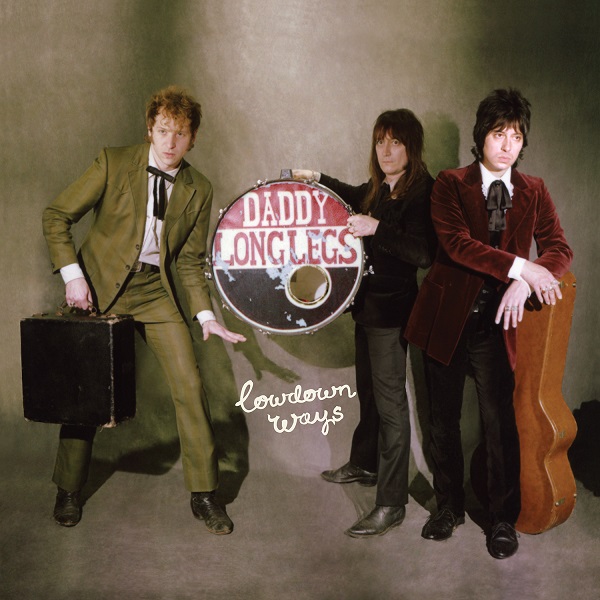