I was lucky to catch Ryan Hamilton & the Harlequin Ghosts on one of the seven dates on their ‘This is the Sound UK Tour’. After the release of the first album under their new name, ‘This is the Sound’, in May fans were looking forward to hearing songs from the new album as well as the band’s classic hits. Arriving at the Borderline at about 7:15 pm just in time to grab a drink and watch the support, Dexy, at 7:30. I was sad to see so few people had turned up early to see him with a good acoustic set to warm up ready for Ryan Hamilton. It’s crazy to think 10 years ago on the same day I was off to Wembley to see the Jonas Brothers surrounded by thousands of screaming under 15 year old girls for my first ever gig and here I am now in the borderline with about 20-30 people, mainly men over the age of 30.  Although it is on the rare occasion of attending a concert with my Dad that I was not the only millennial at the gig!

Ryan Hamilton and The Harlequin Ghosts dressed up in suits and in high spirits came onto the stage and opened the set with Smarter from the album ‘The Devil’s in the Detail’ and Mamacita from the new album ‘This is the Sound’ with the venue considerably more packed out for the main act. The combination of the small venue, Ryan’s interaction with the crowd and the rest of the band’s enthusiasm made the gig a more intimate and friendly experience for all the fans in the room, who knew every word to every song. It felt as though the band were part of the crowd as Ryan had banter with the crowd as we took selfies with the band from the front, and drank wine straight from the bottle after his trip to spoons earlier in the day, really embracing the British culture. For my first and probably last gig at the borderline as it is, unfortunately, closing down it was definitely a memorable one. As the set reached an end the band closed with ‘Freak Flag’, which was clearly a fan favourite as the crowd sang at the top of their lungs, as well as the title track from the new album ‘This is the Sound’ before leaving the stage. As they came back to stage for an encore with classics such as ‘I’m so glad’ and ‘Ode to The Idiots’. After the band finished they went straight to the merch stand to meet their fans and sign CDs and records. 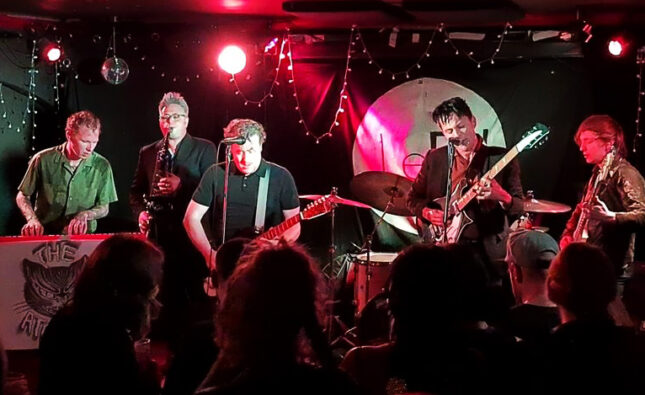